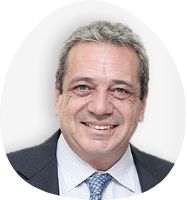 Born in Jerusalem, Mr. Nuseibeh studied in the United Kingdom (Eton College followed by a Chemical Engineering degree) and started his career in the oil and gas industry in 1976 as a Petroleum Engineer with ADCO, Abu Dhabi. He joined Total in 1980 as a reservoir engineer and since then held a broad range of positions within the company.

His international career has taken him to Indonesia in 1984 as a Senior Technical Training, UAE in 1987 as Head of the Reservoir Department at Total Abu Al Bukhoosh, where he later progressed to Petroleum Development Manager. In 1993 he spent two years in the Reservoir Division at Total’s headquarters as Head of Europe &CIS Region, before moving to the Group’s New Projects Division where he was Head of the Africa Region until 1997. In 1997 he was appointed as Managing Director in Total subsidiaries, in Nigeria, Libya, Syria and Yemen.