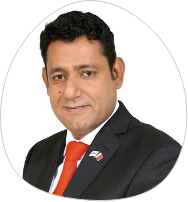 Abdulla Habib was appointed as Chief Operations officer on 2nd December 2018 and he has been Director of Reduction Line 6 Start-up since July 2017. He has been with Alba since 1995 when he joined as trainee engineer. Abdulla has played a vital role in improving safety performance in Alba Operations. He was in charge of Line-5 recovery in 2017 after long power outage in one of the safest and faster recovery in the world. He contributed significantly in increasing metal production in Alba to 1,011,101 in 2018 by aligning the teams, driving innovative ideas and introducing more disciplined culture among workforce.

Abdulla holds a PhD in Chemical Engineering and Master’s Degree in Aluminium Smelting from University of New South Wales, Australia. He also holds MBA from ESSEC/ French Arabian School. Abdulla is a member of many international committees related to Aluminium Industry like TMS (The Material Society)